17 February 2019 | Chronicles from the Institute 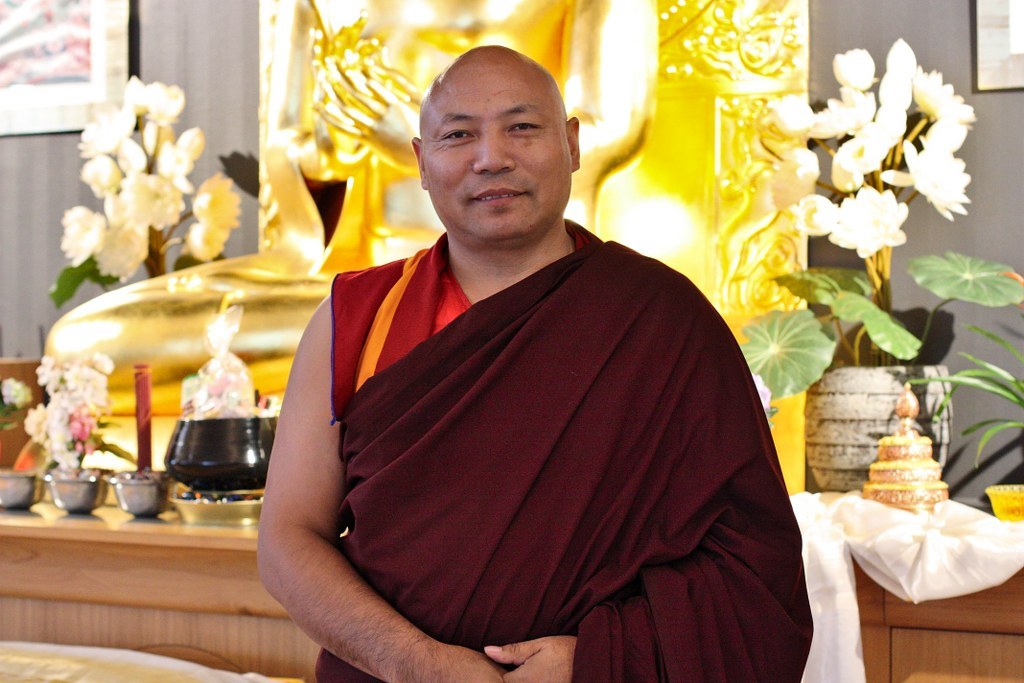 “I am well aware that my dharma practice had been based on blind faith; this is why I became interested in studying Buddhist philosophy. I came to understand that it is through study and contemplation that faith based on reason, emerges”, an excerpt from the biography of Khen Rinpoche Samdup. He goes on: “The main objective of Buddhism is to attain the state of liberation and complete omniscience; the path which allows one to realize this goal is the conduct of love and compassion as well as enlightened mind linked to the view of emptiness and interdependence. I felt determined to apply myself to the practices of study, contemplation and meditation.”
Today, Khen Rinpoche shares the fruit of this determination; years of study and practice under the greatest masters, in different monasteries and institutes in Tibet and India as well as in the shedra of Dzongsar where he is currently the principal.

“What first comes across from him is humility; he is not interested in appearances. He is available for each and every one, no more, no less.” –Bertrand
“He is accessible and precise; his teaching is not watered down allowing him to speak of complex notions in a rather accessible manner.” -Sophie
“His teaching is without embellishment, as if he himself is without importance so much so he is centered on the Dharma. He is without seduction” –Jean-Louis 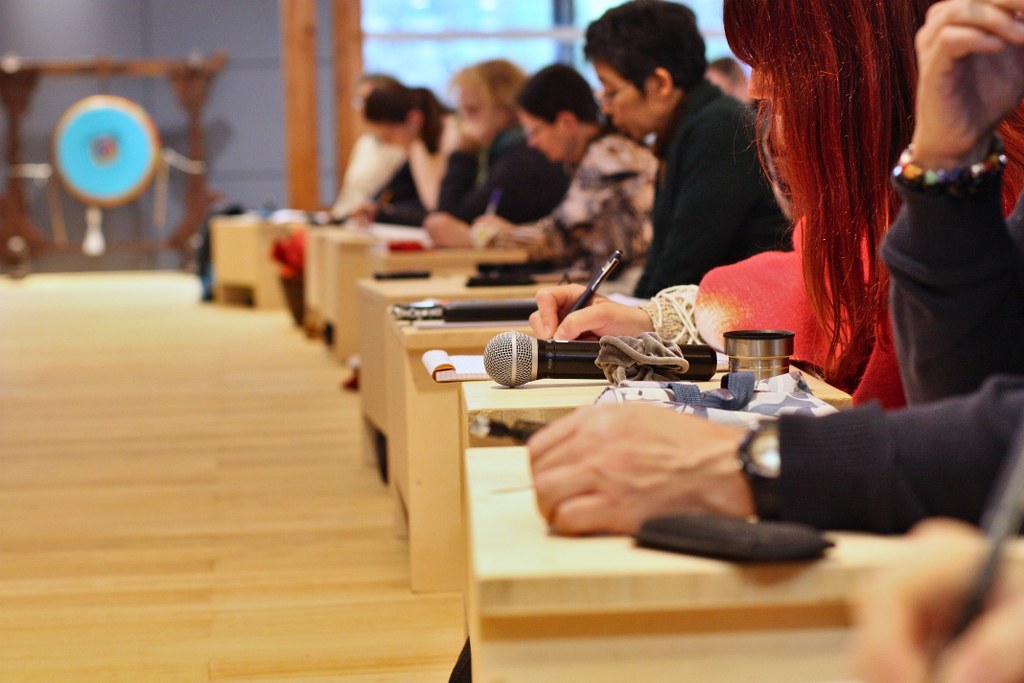 His life is, in effect, the expression of study and meditation: born in Tibet, he took refuge at 7 and became a monk at 12 years old; until the age of 15, he travelled along side his master Garchen Rinpoche, in accomplishing cycles of rituals in winter and retreat in the summer with him. A little later, he received essential instructions on meditation from Khenpo Munsel, a great Dzokchen master. Following that, after a long voyage across Tibet, he met Khenpo Jigmé Puntsok from whom he received instructions, empowerments and teachings, remaining with him for four years. Next, he studied yet more philosophy and logic at the shedras of Dzongsar and Kagyu College in India. Today, Khen Rinpoche’s knowledge covers teachings from all four schools of Tibetan Buddhism. He also wrote a commentary on one of the great philosophical texts of the Kagyu lineage. Aside from his responsibilities as the principal of Dzongsar shedra, he is also the teacher at the Gar Drolma Choling center in Ohio, USA. 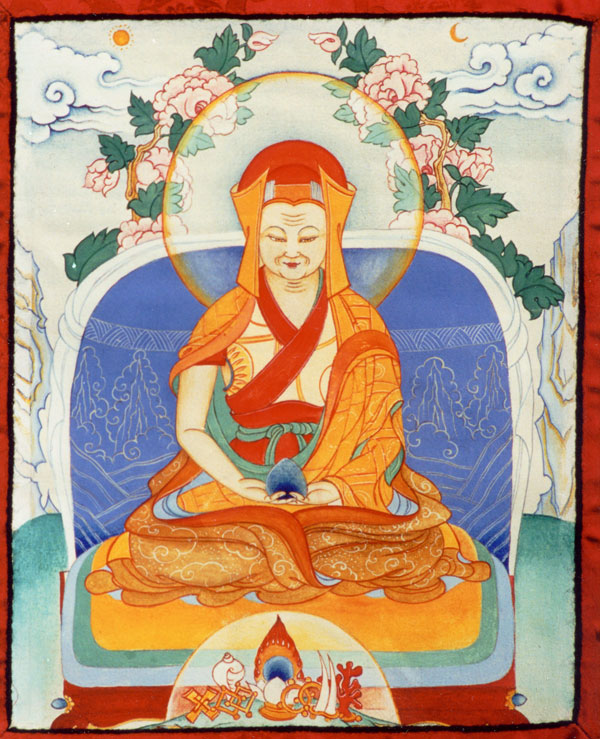 A Path in Four stages

May the mind turn towards the Dharma

The first stage consists of becoming a good human being in the perspective of obtaining a better existence. It is about having correct and positive behaviour and not harming others. This approach is of course based on causality, the reality of karma.

May the Dharma accompany me on the path

Next, we understand that samsara is the nature of suffering and it is about liberating oneself from it.

May the path dissipate the confusion

This time, the procedure becomes more extended since we are including all beings. This is the way of the bodhisattva, which extends here to the level of behavior or of conduct. It is about putting enlightened qualities (the paramitas) into practice, such as generosity, ethics, patience, enthusiastic effort and meditation.

May the confusion transform itself into wisdom

We are always in the approach of a bodhisattva, but here it is the view that becomes clear. It is about understanding that phenomena is without essence; it is the approach of emptiness. Emptiness without characteristics as experienced by a mind without grasping. 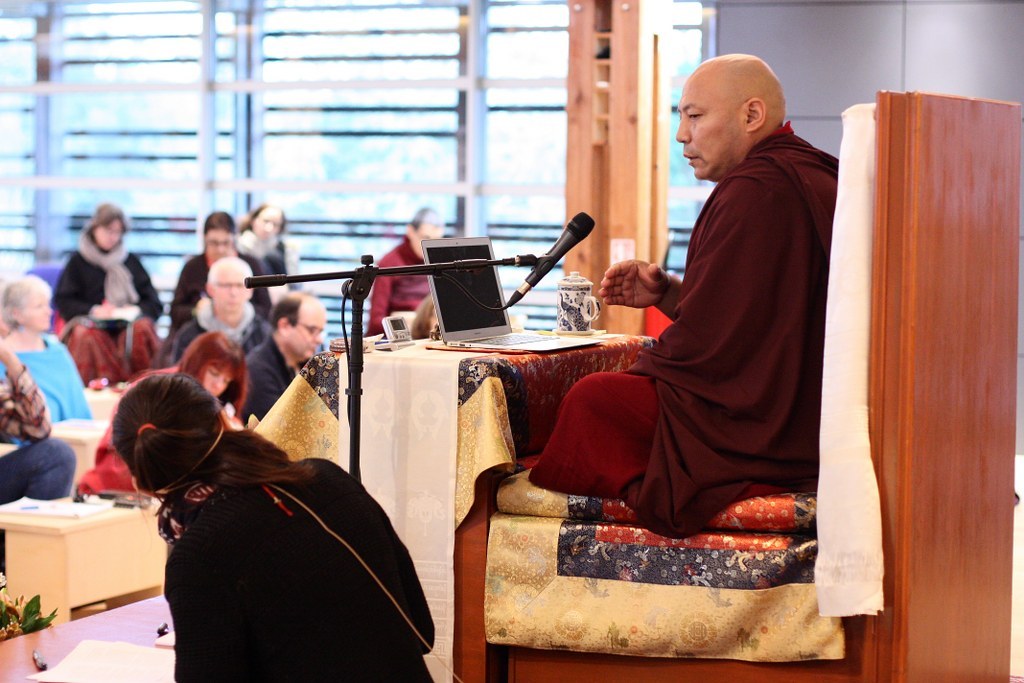 He also indicated some possible errors so that we might correct them. He reiterated the example of the snake and the cord. Due to misjudgement and distraction, we misunderstand phenomena. Just as we may take a simple cord for a snake, we take phenomena as real all the while it is emptiness. To meditate on emptiness in the wrong way would be to say that there is no snake: the practice then becomes a diversion. The correct view of emptiness consists of turning on the light and seeing that the cord is not a snake but rather just a cord. Khen Rinpoche also spoke about refuge a lot, of motivation and of dedication; he indicated that certain harmful acts are carried out without our even knowing it.

At the end of these two days, sympathizers and Buddhists as well as practitioners, every one could find what he needed in this short teaching to be able to put the dharma into practice in his life. It was to the conclusion general: he should come back.

Many thanks to Jean-Louis, Sophie and Aurélie for the reports that they provided so that I might write this posting for a teaching where I couldn’t be present.

Discover more photos on the Facebook album for this Chronicle

Chronicles from the Institute