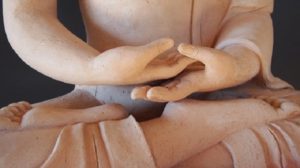 That morning, while he was residing at the monastery of Shravasti, after a short night of sleep, the Buddha Shakyamuni rose, at the same time as the sun as he did each morning. He absorbed himself in several hours of deep meditation. Then, he made a round in the monastery to see if any of the monks were in need, particularly those that were ill. Following that, he went out to beg for his food. Not that he really needed any, but that allowed him to encounter those that he would never see in the monastery.

He could also respond to their questions and give advice. After going from house to house to receive food, he returned to the monastery to eat and share with the monks who hadn’t received any. Once meal was finished, the Buddha put away his bowl and shawl until the next day. Then, he went to sit on a seat placed along the outer wall of the monastery, legs crossed and his back straight. In his mind, he returned to the vow that he took long before: share enlightenment with all beings. Seeing that the Buddha had taken a seat to teach, a large gathering of monks along with many bodhisattvas assembled around him. All was set for a teaching. Just at that moment, the arhat Subhuti got up. He was the one who was known as “the man with a long life and full of good sense”, he was recognized and respected by all for his accomplishments. Subhuti rose, uncovering his right shoulder, brought a knee to the ground and joined his hands in the direction of the Enlightened One in a sign of respect. He had long thought about the questions he wanted to ask the Buddha. He knew the importance of the enlightening mind and he wanted, for himself as well as the others, that the Buddha clarify the meaning. First rendering homage, he then asked a triple question that can be summed up as such:
-What conduct can be adopted when we enter into the bodhisattva path?
-How does one practice this path?
-How can one master his mind so that enlightening mind does not diminish?
The Buddha confirmed: “Subhuti, well said, very well said, it is exactly how you said.”
Then he responded to the questions: “Listen well and keep these words in mind” 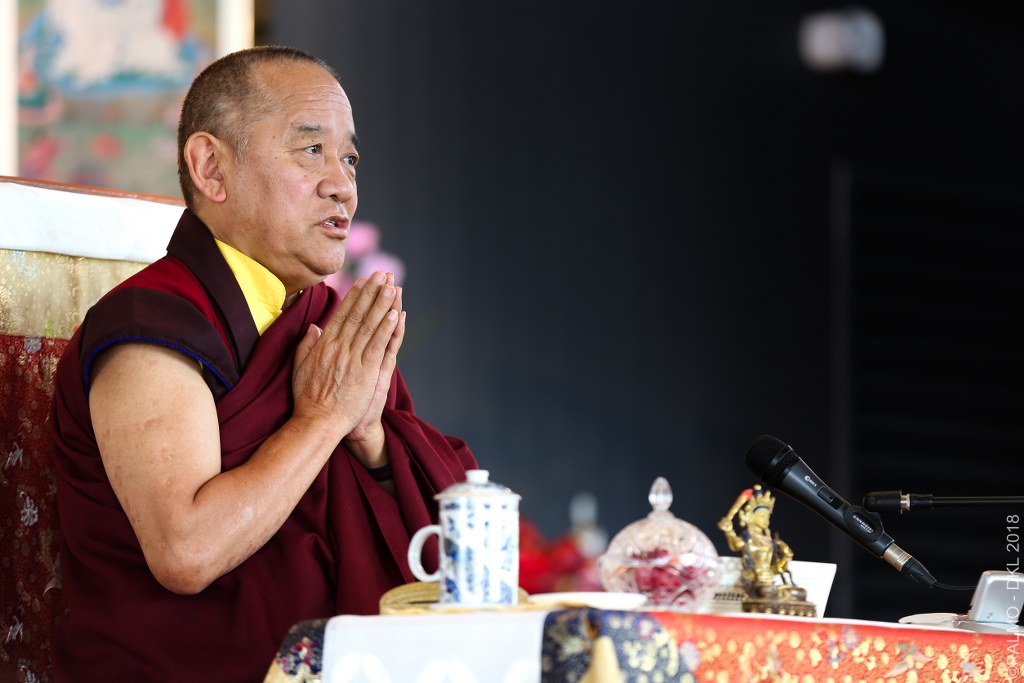 We are about forty people in the teaching hall of the institute to listen to Khenpo Chödrak Rinpoché who explains the circumstances in which the Diamond sutra was taught by the Buddha. This sutra is one of the most well and renowned Buddhist texts. This year we begin the study of this text in the framework of Buddhist treasures of knowledge, commonly known as summer course. Rinpoché warns us at the beginning of this first week of teaching: in order to truly understand the dharma, it is necessary to know the detailed explanations. No aspect can forego the capacity he has to give reference to past masters, to quote other texts, to enrich the meaning with metaphors, to give historic details. The sutra comes to life and its meaning progressively emerges throughout the commentary.

The central theme of the text is bodhichitta, enlightened mind. It is about practicing progressively. It all begins with a profound wish, a powerful intention: to realize Buddha the enlightened state in order to be capable to accomplish the goodness for beings. Intention is not enough, it is about being able to take action. And for these acts to be truly liberating, we have to cultivate knowledge of emptiness. That’s how enlightened mind works. In short, this sutra establishes the base, the path and the fruit of the two realities, relative and ultimate; it explains the way, the obstacles and the means of dissipating them. 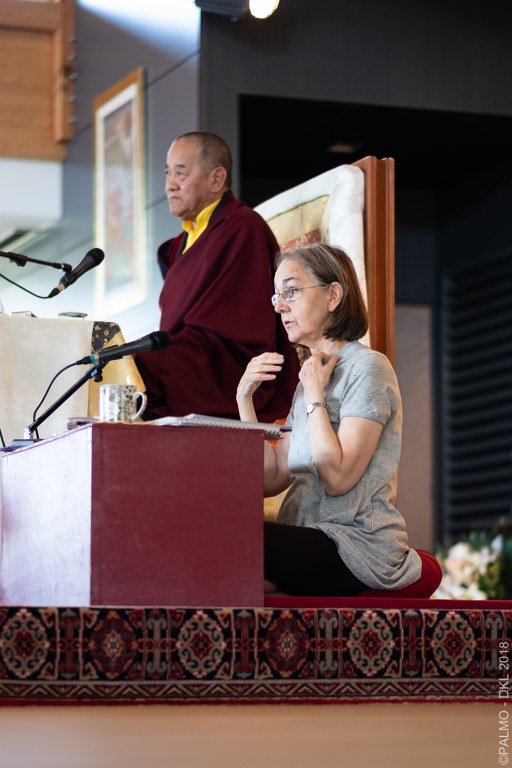 In the morning Khenpo Rinpoché teaches two sessions of an hour and a half, which despite translation gives him the time to explain. In the afternoon, Tibetan courses are offered for those who wish and we also go over our notes from the morning’s instructions in order to verify our understanding and eventually generate questions. Despite being quite dense, the days go by rapidly. And thanks to the recall, joyfulness continues: 2600 years after they were given by the Buddha, we still have access to the instructions of this sutra. Other than the text being conserved to the present day, the masters have transmitted and clarified these teachings. It is thanks to the efforts of the Buddha Shakyamuni who put in place this system of transmission. It is a real sentiment of gratitude which arises when we realize this rigorous preservation and the availability of the dharma. Khenpo Chodrak adds: “This gratitude allows us to access the spiritual influence of the Buddha, it is what participates in the understanding of these words of the sutra and putting into practice the instructions.”

One week of the three allotted to this summer program is already finished. A one day pause to breath. We look forward to continuing…